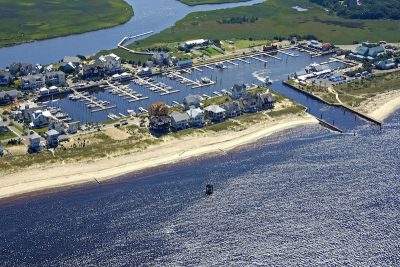 Bald Head Island, historically Smith Island, is a village located on the east side of the Cape Fear River in Brunswick County, North Carolina, United States. Compared to the nearby city of Wilmington to the north, the village of Bald Head Island is small and somewhat remote. It is accessible by ferry from the nearby town of Southport and by four-wheel drive from Fort Fisher to the north. There are few cars on the island; instead, residents drive modified electric golf carts.[citation needed] Bald Head Island is nationally recognized for its sea turtle nesting activity.

The population of the village was 158 at the 2010 census.[4] The village is part of the Wilmington metropolitan area.

The village is revered for its picturesque nature and is a popular location for vacationing. It was the primary filming location for the film Weekend at Bernie’s in 1989 as well as a major location in The Butcher’s Wife in 1991. “Old Baldy”, its out-of-service lighthouse built in 1817, is the oldest still standing in the state.

Find My Dream Home
What's My Home Worth?
Help Me Relocate